The ad that Fox wouldn’t air

The ad that Fox wouldn’t air

If you love news, politics and media, then a Presidential campaign season is better than the Super Bowl, World Series or March Madness. One of the high points of following any campaign is watching the debate, hoping your candidate delivers a poker-faced zinger rather than digging their electoral grave.

Roger Ailes reinvented the modern Presidential debate, helping Richard Nixon secure victory over Hubert Humphrey in 1968. Man in the Arena explored that debate and everything Ailes did to create “made for television” political campaigns that resulted in the election of 3 Republican Presidents.

So, it was with a nod to the Ailes chapters in political history that Comeback Productions decided to run ads for Man in the Arena before and after the Trump-Biden debate on Tuesday October 29. The ad was delivered in the correct format, the hefty payment was made, and a cable provider confirmed the ad was scheduled to run on Fox affiliates in select markets. Fox affiliates? Well, yes. We don’t think MSNBC viewers would buy a film about Roger Ailes.

Somehow the ads didn’t run. Here’s the explanation we received:

Another day, another variation of Murphy’s Law was proven: If something bad can happen to someone (or something, even a documentary) right-of-center, it will.

Interestingly, a great deal of the Trump-Biden debate coverage focused on the role of Fox News moderator Chris Wallace demonstrating a preference for former Vice President Biden. In fact, several of his colleagues at Fox News went so far as to criticize him.

Would this have happened under Roger Ailes’ leadership? Many feel that the post-Ailes, a decidedly more liberal Fox News made a critical error by allowing Wallace to moderate. As they say, when a journalist becomes the story, it’s a problem. We were intrigued to see a chorus of agreement arise when Mrs. Ailes weighed in here: 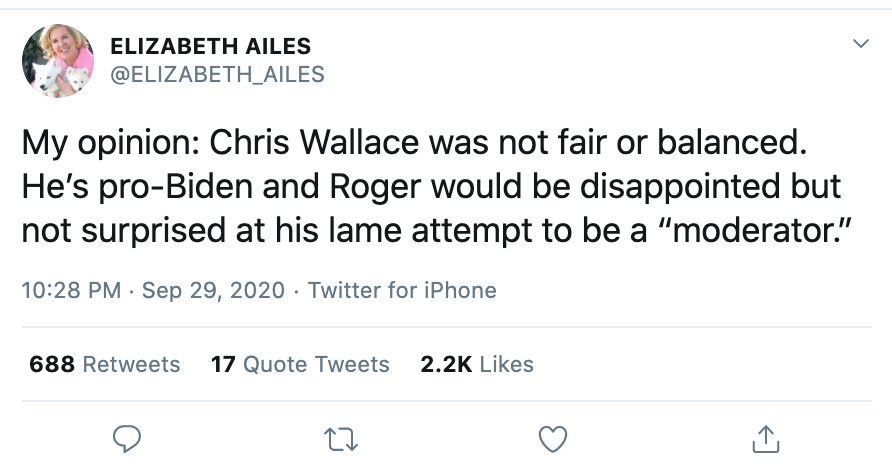 Please watch the ad for yourself and let us know what you think. Too provocative for a network that has branded itself as fair and balanced? Share it with a friend or, better yet, buy that friend a DVD. We’ll put whatever we make from sales back into promoting the film.

Thank you for your support!